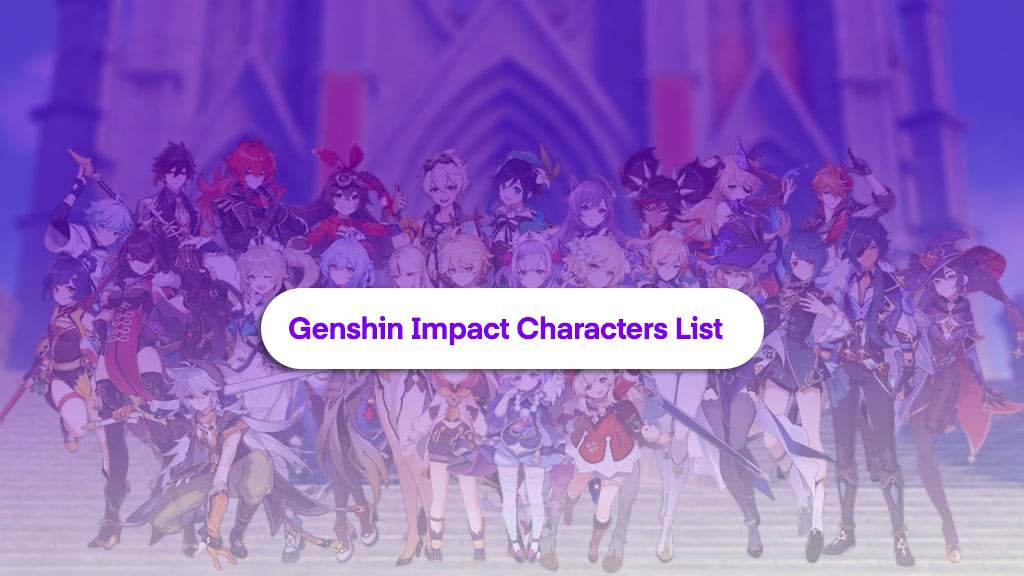 By George PhillipsAugust 5, 2021No Comments

We’ve returned with the Genshin Impact Characters List! Genshin Impact is a free-to-play gacha game made by MiHoYo, a Chinese video game company. It’s well-loved thanks to its stellar visuals, carefully crafted world, and compelling storylines.

With 34 playable characters in Genshin Impact (not counting Aether, Lumine, and Paimon), it’s easy to get lost when deciding who to level up or summon. Here’s a Genshin Impact characters tier list that will give you a quick rundown of every character in Genshin Impact, where they fall on the tier list, and how excited you might want to be when you pull them.

Before we get too deep into things, it’s worth mentioning three facts. First, Genshin Impact rewards investing in characters more than it rewards having a deep roster of characters. Having good artifacts, high-level talents, and a good weapon for a “low-tier” character is better than having a “high-tier” character. Second, the game does not present a level of challenge sufficient to necessitate “high-tier” characters in all but a select few activities. Play characters you have fun with. Third, and perhaps most importantly, the team comp you run and how you play can dramatically shift these tiers. Amber, for example, is banned from many speedrunning competitions because she’s too powerful. She’s thought to be weak for playing the game normally, but her burst applies pyro three times after a short delay, allowing her to do absolutely absurd damage with Chongyun or a few other Genshin Impact Characters List.

S-Tier: Consider pulling for these, even if you don’t like them:

Bennett – a mediocre healer, dps, and pyro applier with a fairly large ATK buff for your teammates

Sucrose – better at grouping than Venti in many situations, and can boost team damage thru EM

Xiangling – one of the best pyro applicators, does respectable damage while off-field

Hu Tao – arguably the best dps in the game

Ganyu – clunky to play, but does enough damage that she’s worth it

Eula – unlike other 5-star dps, requires very little support or setup to tear through content

A-Tier: If you like these characters, definitely pull for them

Klee – still one of the best dps in the game, with a great element. Can be awkward to play

Xiao – overpowered with burst up. Requires a battery

Childe / Tartaglia – solid and fun with no real weaknesses, but numbers slightly worse than other 5-star dps

Yanfei – suspiciously close to Klee’s dps for a 4-star

Beidou – E can be frustrating, but Q is incredible for any autoattacker. Requires a battery.

Jean – great at healing, can battery for anemo chars. Charged attack knocks up.

Diona – shields are mandatory on some fights. Can turn on cryo resonance

Qiqi – the best healer in most situations by a mile. Not great at anything else, but sometimes you want a healer

Diluc – with a solid team, can put out respectable dps. Arguably worse than other 5-star dps, though

Mona – burst is great for setting up combos. Can apply hydro for team comps that can’t use Xingqiu

Razor – the game’s premiere field-hog. Solid, but will make it hard to play the other 3 chars on your team

Chongyun – flexible. Can enable off-field cryo with skill, burst with burst, or turn on cryo resonance as a sub-dps

Noelle – Razor, but also a healer. Requires constellations to get going, but allows you to run some pretty nifty comps

Keqing – doesn’t really bring anything to the table. Charged attack builds are okay, but stamina hungry

Albedo – numbers are very underwhelming for a banner-only 5-star

Barbara – good at healing, brings little else. Unlike Qiqi, hydro resonance is not useful

C-Tier: Do a bit of research before pulling for these characters, even if you like them

Amber – hilariously exploitable burst at high levels of investment in a handful of comps, but otherwise has very low damage

This Genshin Impact characters list contains an estimate of the age of the current playable roster. In many cases, official sources for a character’s age do not exist, so fan estimates have been used where necessary.

The Best Characters in Genshin Impact

The best characters in Genshin Impact are the ones you have fun playing. Beyond that, building a team that works well together and getting artifacts, weapons, and talents for your characters is much more important than who you play. That said, the ‘best’ characters in Genshin Impact are recent 5-star dps with dedicated teams built around them. This includes Hu Tao with Xingqiu, Ganyu with Xiangling or Mona, Eula with Fischl or Beidou, Xiao with Venti, Jean, or Sucrose, Ayaka with Xingqiu and Diona, and Kazuha with just about anyone who’s not Geo. All of these characters deal great damage and work very well with their teams, allowing you to crush content with ease.

The Worst Characters in Genshin Impact

The worst characters in Genshin are ones you haven’t invested in and characters you don’t enjoy playing. For most people, this includes Amber, Lisa, and Barbara, since they’re free, clunky, and don’t have amazing numbers outside of a few specialist teams. Currently, of the non-free characters, XInyan and Albedo are generally thought to be the worst. Both characters suffer from awkward skills, odd scaling, and low numbers that make it hard to do respectable damage. That said, with a high level of investment, all of these characters can be extremely useful in some situations.