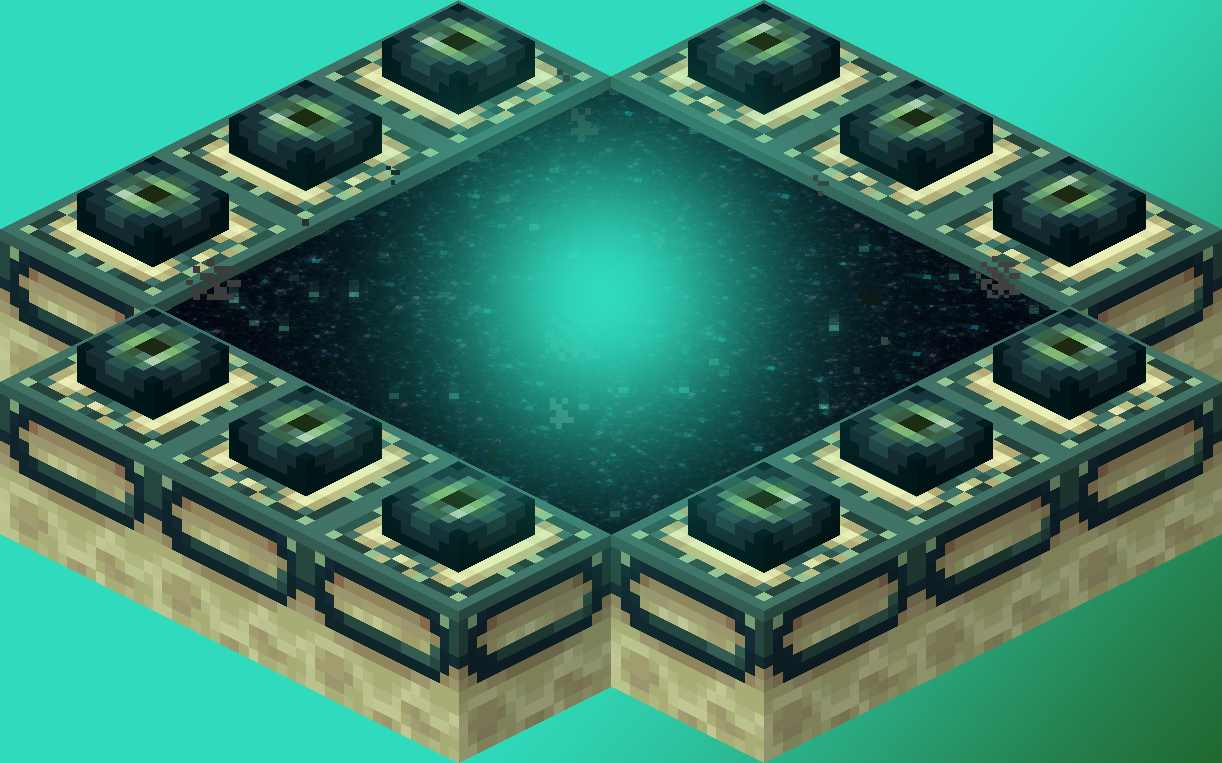 End portal how to make it and finish Minecraft

End portal how to make it. So you’re ready to get to the end game of Minecraft, but are unsure of what to do. Don’t worry, this guide has you covered on all crucial points.

Ender Pearls are dropped only by endermen, and you’re going to need at least 12 of them in total. There are two ways to get ender pearls; the first is waiting around at night for them to spawn in the over world. This first way is far slower because endermen don’t have the same spawn rate that the other mobs do. The second way, and objectively the most efficient way, is to go to the warped forest in the nether. You’ll know you’ve found the warped forest when you see grayish-green trees are all over the place

After finding the warped forest, you’re going to want to farm endermen until you have 12 ender pearls. You may want to pick up an extra one just in case you lose one. More on that in a later step.

You’ll need to find blaze rods so you’re able to create blaze powder. Blaze rods are dropped from blazemen. Blazemen are found in nether fortresse. Nether fortresses are hard to miss with their huge ramperts and long hallways. They look exactly like their name implies; like a fortress.

Once you’ve found a nether fortress, you should look for blazemen spawn blocks.. Don’t destroy it because you want to be to continually farm the blazemen as they spawn in. By the end of this exercise you need to have 12 blaze rods in total.

Like the ender pearl, you may want to collect an extra blaze rod just in case. You’ll see why in Step 4.

Step 3: Creating The Eyes of Ender

To create an eye of ender, you’re going to want to turn the blaze rods into blaze powder. When you have your 12 blaze powder and 12 ender pearls, you can combine them to make eyes of ender. These are very important for gaining access to the End.

Step 4: Using An Eye of Ender

If you haven’t already found an underground stronghold you’ll need to use an eye of ender to guide you to one. You do this by right clicking your mouse, or pulling the left trigger if you’re using a controller. The eye should fly up in a specific direction for a few blocks and then drop. Once it drops, pick it up and repeat the process until the eye is pulling towards one specific spot on the ground. You’ll know you’ve reached your destination once it starts to get attracted to a specific spot. At this point you can either look for a cave or dig straight down to get to the stronghold.

Sometimes the eyes of ender will disappear after so many uses, so this is why you were told to get an extra ender pearl. As you’ll see in Step 6, you’ll probably end up having enough in total by the time you get to the portal, but it’s not a guarantee and it’s better to be safe than sorry.

The stronghold is a dangerous place, especially for new players. They’re extremely dark and unforgiving, but if you’re patient with it you shouldn’t have any real trouble. There are plenty of chests in there to loot, so don’t skip out on those. Once you get to the central point of the stronghold you’ll find the ender portal.

The list the last step. The Ender Portal has 12 slots around it, and each one takes an eye of ender. There’s a 10% chance for an eye of ender to spawn in each one of the slots, so odds are you’re going to have an excess of eyes in your inventory. This is fine. It’s better to have more than a enough than to have not enough at all.

Hold the eye of ender in your hand and start right-clicking (left trigger on controller) on the slots. The eyes should start being placed in the slots. After all the slots are filled up, the portal will activate and you’ll have access to the End.

People in a Minecraft village comprise everything from farmers to fishermen to butchers to priests to armorers, depending on how many beds there are. There are buildings, dwellings, and the town center in a Minecraft village. When most people gather at the village center or meeting place, this biome will define the sort of village.

Respiration Minecraft – How to Swim Underwater