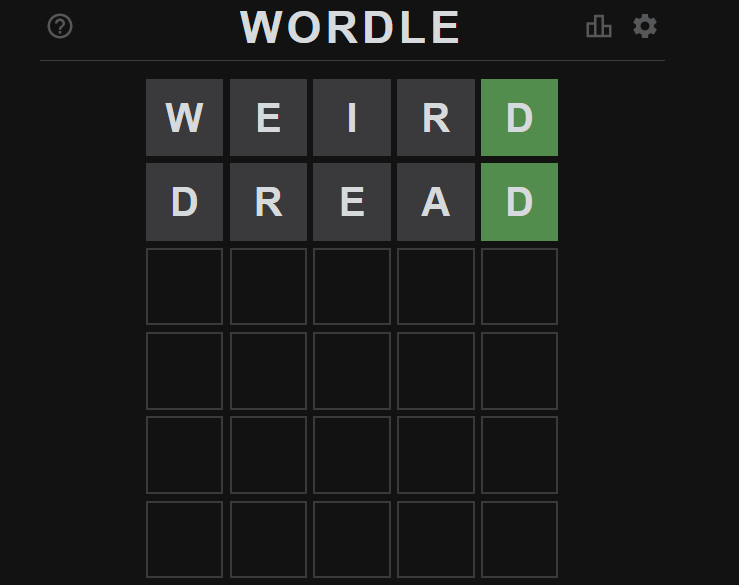 Why Worlde become an internet sensation and how to beat it

By George PhillipsFebruary 21, 2022No Comments

If you spend any amount of time on Twitter, you’ve probably heard of the latest craze among millennials that has taken the internet by storm, Wordle. If you’re wondering what Wordle is, here is a guide on what it is, why it’s so popular, and how to play it.

Wordle was created by a New York City-based software engineer, Josh Wardle, with the title of the game being a play-on-words of his name. He originally developed the game for his word game-loving friend, Palak Shah, who helped to develop the game. It is an online daily word game in which you are given a five-letter word hidden by tiles for you to guess. You have six chances to guess the word, and with each correct guess of a letter in the word, a tile turns green. If you have guessed a letter that’s in the word but in the wrong spot, the tile will turn yellow, and if you guess an incorrect letter altogether, the tile will turn gray. With each incorrect guess of the word, you will receive a hint about what one of the five letters are and its placement, and you are then given one chance to guess correctly. If you’re looking for a real challenge, you can try performance mode and try to guess the word of the day in three, two, or one tries.

Wordle can be played only once daily, with a new word of the day being given every 24 hours. Once you’ve either guessed the word or run out of tries, you are able to post how many chances it took you to guess the word to Twitter while keeping the word of the day concealed.

Why Is It So Popular?

Wordle has garnered a whopping 300,000 daily players. How, you may ask, has such a simple word game become so popular? Well, there are a few reasons for this.

Firstly, every Wordle player is given the same word of the day, giving it the ability to become a social activity. With the COVID-19 pandemic separating loved ones and leaving many feeling disconnected from one another, Wordle gives users a way to connect with one another. You chat and bond with friends over a daily word by sending a text message about how you did or giving each other hints.

Once you’ve run out of guesses for the word of the day, you can easily share it to social media for other to see with a simple click of a button, letting others know how well your word-guessing skills were that day. After this share feature was added, the game really took off, a feature that serves as advertising by leaving others with curiosity and interest so that they play it themselves, Wordle has also become a target for internet memes, which further advertise the game on social media and add to its popularity.

In addition to being fun, Wordle also has an educational appeal. It can serve as a daily lesson to help you sharpen your vocabulary, use logic and reasoning, and exercise your problem-solving skills. While being educational, it is also very simple to play, with common words containing only five letters being used. As a new word is added daily, and as you aren’t able to keep playing after you’ve either already guessed the word or failed, it keeps you coming back to play again each day. WIth the game’s simple yet satisfying colored blocks, Wordle’s aesthetic appeal may have also contributed to its success.

Another appealing aspect of Wordle is its absence of usual gimmicks and engagement tricks that are often used in other online games. Unlike most other online games, Wordle does not send push notifications, include in-game ads, or ask for your e-mail or other personal information in order to play.

If you yourself would like to try your luck at Wordle, here are some tips and tricks to help you get started. A number of Facebook groups and fan-written articles have also popped up to share strategies.

Choosing your first word is crucial to getting a good start to the game. A helpful trick is to choose a five-letter word with as many vowels in it as possible for your first guess. Some examples include, but are not limited to: adieu, media, radio, ratio, route. If that doesn’t work, try using words that feature more than one of the most common consonants, with the most common consonants used in the English language being h, s, r, and t. The word “snort” is a great example. Since the game only uses common five-letter words, the answer won’t be anything too obscure.

Once a letter has come up gray, it is a good idea to try to avoid using another word that contains the same letter. It is also important to note that letters may appear twice in words such as chill, trees, or teeth.

The most powerful trick to succeeding at any word game is by having an extensive vocabulary. To become a Wordle master, read more to expand your vocabulary. It can also be helpful to keep a dictionary on-hand while playing to look for five-letter words, or to look up a list of five-letter words on Google. To sharpen your skills, play other popular word games such as Scrabble.

Wordle is a fun new game that can help to keep you connected with friends and family, sharpen your vocabulary and problem-solving skills, and pass the time. In our era of COVID-19 bombarding the news and social media with doom and gloom, Wordle is providing the internet with a healthy distraction and a means to help us feel more connected with one another. However, make sure to be wary of the many Wordle dupes out there that may ask for personal information or money.

Wordle is not available on the App Store or the Google Play store. Instead, it can be played only from your browser on the Wordle website.