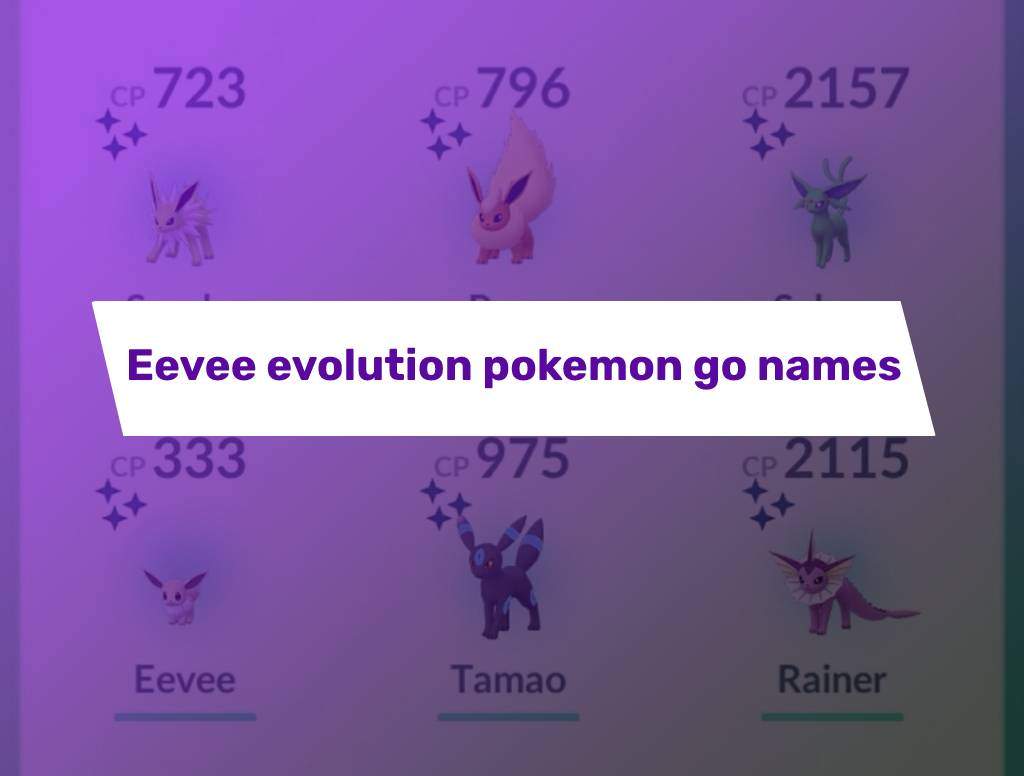 By George PhillipsJanuary 9, 2022No Comments

If you are searching for Eevee pokemon go names for evolution you came to the right place. Pokemon has been a popular game for ages. With Pokemon Go, the stakes are higher. There are plenty of characters to choose from and with Evee evolution nicknames becoming a rage, the popularity of the franchise has hit roof high. In this article, we would discuss the Eevee pokemon go names nicknames, the Eevee evolutions, and the likes.

Unlike the other Pokemon, Pokemon Go Eevee has a total of eight evolutions. The general idea is that it is hard to get while it is not at all.

The characters that are at your disposal are Umbreon, Espeon, Vaporeon, Leafeon, Glaceon, Flareon, Jolteon, or Sylveon. Given the number of characters. Relying on random methods for evolution is a strict no-go.

Before we delve any further, let us first relate each character to the elements.

Let us look at the eeveelution and what they are lovingly called:

This is the part of Eeveelution where you get them with the name trick. It has been a proven process for a long and almost every trainer worth their salt has used it to get their Eeveelution. However, if you do not wish to use the name trick, there is another method that may help you get them.

How to evolve Eevee without the name trick?

We had seen the name trick in the previous paragraph. Most often that is the exercise that is used to acquire the Eevees. However, for those considering not to use them, there is a way out.

Vaporeon, Jolteon, and Flareon are the easiest to get of all the others. All one would need are 25 Eevee candies. It also needs to be understood that this is not a foolproof trick, since there is no guarantee the Eeveelution will take place through this trick. It is a game of chance, but the good part is that since the candy requirement is low, trainers will have multiple chances to get all three.

The next generation 2 Eeveelutions to come are Espeon and Umbreon. It is not hard at all though I do admit, it may be a bit tricky. All you need to do is make them walk for 10 km with you and earning two candies. The stress point is those two candies, and it is a vital part of the entire exercise. Once that is done, look at the sky to ascertain the time of the day. This is important since the evolution of Espeon can only take place at night and that Umbreon during the day. One needs to be careful here since Pokemon Go does not reflect day and night in a manner we as humans are used to. As I mentioned, look at the color of the sky before you are certain about the time of the day. The day will give you the psychic Espeon and the nights will give you the dark type Umbreon.

Leefeon and Glaceon are a trickier part. You need to acquire in-game items for this and ensure that you are near a Pokestop. For Leafeon, it is a Mossy Lure and for Glaceon it is a Glacial Lure. However, since there are in-game items, they need to be purchased for 200 coins each. These lures act as normal lures, the only difference being that they attract specific Pokemons.

Sylveon is the latest addition to Pokemon Go. The process to obtain it is comparably complicated and tedious, but so worth it. Sylveon as we had earlier classified is of the fairy type who loves to be friends with the trainer. Hence, trainers have to make Eevee their buddy and earn 75 hearts, though another school of thought mentioned that it required only 70 hearts. This will take time, but as a trainer, you will know you are in the right direction once the silhouette in the evolution area starts showing Sylveon. The usual trick to acquire Sylvian is to befriend it completely. So, activities like playing with it, feeding it, and stopping by new Pokestops are undertaken. It is also important to know that a maximum of 20 hearts can be earned in a day, so to earn a total of 70 or 75 hearts, a fair bit of patience is required. In theory, at least, it takes 4 days for an Eevee to evolve into Sylveon. I do understand that this method is a bit more complicated compared to other Eeveelutions, but at the risk of repeating myself, it is worth it.

A trainer needs to know that using the name trick has always been the time and tested method. The reason being, there is no control over Vaporeon, Jolteon, and Flareon. These are random selections and any news of controlling the selection procedure is false. For the other Eeveelutions, particular methods can be followed, if the trainer so decides of junking the name trick.

For the other Eeveelutions, that is barring Vaporeon, Jolteon, and Flareon, the methods used are fairly straightforward and unique. Those methods have been created for the particular Eeveelutions and can be carried out with no hassles.

Eevee evolution pokemon go names are an integral part of Pokemon Go and in this article, we have seen the two methods of acquiring them. The name trick has been in use for most of its existence while the one without the naming trick is a more recent phenomenon, though not too recent. As a trainer one has to choose what suits him or her more.